‘It was a successful experience’, Social Economy Europe’s view of the european social economy summit

The Social Good Accelerator, member of the steering committee of the event, was present and contributed to the promotion and dissemination of its ideas, namely raising awareness on the necessary digital transition of the social economy through two workshops and a conference.

Our member, Social Economy Europe, also a member of the steering committee of the event, also participated in this summit through numerous workshops and conferences.

This interview with Victor Meseguer, Director at Social Economy Europe, aims to enrich the feedback on this major European summit for the social economy.

From the Social Economy Europe side, how did you prepare for this event?

The preparation of the event started in June 2021. The first meeting took place with Pierre Roth and Sandra Guilmin in Brussels at the time when they were exploring the different funding options for the European social economy summit (hereafter “Conference”). At that time, it was already known that the French Presidency of the Council of the European Union was going to take place, so it was expected that there would be a strong presence of the French Presidency, but also a strong presence of the European Commission, which was present through human resources and political representatives. In July 2021, the Social Economy Europe (SEE) team travelled to Strasbourg with the presidents and co-presidents of the European Parliament’s social economy intergroup to have a meeting with the Mayor of Strasbourg. The exchanges focused on the expectations related to the Conference.

From then on, the way of working was similar to that of the SOGA, notably through meetings to co-construct the event. The added value of SEE was also similar to that of SOGA. Our aim was to create bridges between actors, to ensure that the Conference had a European dimension, that it responded well to the interests of Social Economy actors. Our added value as a network is our ability to mobilise people, networks and organisations across Europe.

Also, on the SEE side, we organised our general assembly in Strasbourg, the day before the Conference, which allowed us to mobilise most of our members.

From the SEE side, how did the workshops go? In particular the one on transition pathways, what did you learn from it?

It was an interesting workshop. We mobilised between 30 and 50 people. There were key players in the social economy in the room: both major European networks, for example Cooperative Europe, Philea, ESS France Outre-mer and others. We also managed to mobilise two players who are strongly committed to the social economy in the territories: the region of Brussels and the region of Navarra in northern Spain.

‘It was a successful experience, a first opportunity to educate on a subject that is difficult to understand, not that it is difficult as such, but it is mainly the terminology, the slang that can cause problems. When we talk about transition pathways for the social economy, we are talking about a big strategic plan where everyone must be involved and express their expectations and needs. On this last point, there is a problem of connection with reality. So this workshop was a step to start explaining the exercise we are doing and its importance.

Also, we gathered some interesting information. First of all, the problem with the transition pathways is that you have a lot of access to generalist experts, people who are very knowledgeable about the whole subject of social economy. But it is difficult to find people with expertise on the green transition and the digital transition. There is a second problem. We don’t capture the whole reality of the social economy. We need to capture the whole reality of the social economy, which is much broader. The Social Good Accelerator has a key role to play on this point to get its network involved.

You had a stand shared with ESS France and the CRESS Grand Est. What were the interactions with the public? What types of exchanges did you have?

We had quite a few people from very different backgrounds who came by, including a representative of a Greek association and a journalist from Euractiv, for example. Many of them asked for information on social economy and information on how to join us. 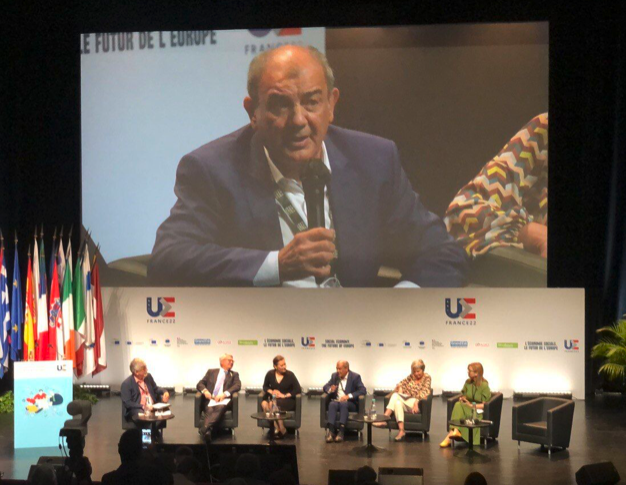 Juan Antonio Pedreño maintains Social Economy Europe’s vision for the future of the sector in the continent, in Strasbourg.

The social economy, the future of Europe: that was the name of this forum. What can we retain from this summit for the future of SSE?

We can retain these key words: alliance, change of scale, major macroeconomic objectives. Our objective is indeed to move from 6.3% of employment in SSE in Europe (i.e. 13.6M jobs) to 10% (i.e. more than 22M jobs) in 2030 by the time of the action plan.

‘The Social Economy Action Plan is our window of opportunity to grow.’

It is not about growing for the sake of growing, it is not about growing for the sake of more money, but it is about growing to create more quality jobs in Europe, to create more integration for disadvantaged groups and/or those at risk of social exclusion, to create more social, environmental and technological innovation and to be the major player in Europe in digital, green and fair transitions. To grow, we need to meet and get to know each other. We need to build more alliances on a European scale, starting from the local level. In this respect, we have a big window of opportunity on our table with the European Social Economy plan.

Are you satisfied with this summit?

We are very satisfied because there were 2000 people registered. There was a risk that it would be very Francophone, but I don’t think that was the case. I saw people from all over Europe: from Lithuania, Ukraine, Latvia, Poland, Romania, Ireland.

You can also see that everything is in place to jump. This is the image of the trampoline. To jump, we need a lot of cooperation and alliances. The principle of the social economy is cooperation, but we can do much better in this area.

What are the next steps for Social Economy Europe?

The next steps are to keep growing. We have recently welcomed two new members, one from Ukraine and one from Poland. We are the voice of the 2.8M social economy organisations in Europe. We aim to represent not only European but also pan-European networks.

We have 2 other key objectives that will happen soon. Before the summer, we want to write a policy paper on the implementation of the action plan with concrete proposals. Since 2014, we have made two proposals for an action plan. For example, we asked for the single platform on the social economy, which the European Commission accepted. But now we have to go further and say what exactly we want through this platform. The new policy paper will address this issue. In parallel, we are undertaking a strategic reflection process to consolidate the organisation.