Editorial – DSA and DMA: Can the EU take on Big Tech?, March 2021, by Arnaud Castaignet 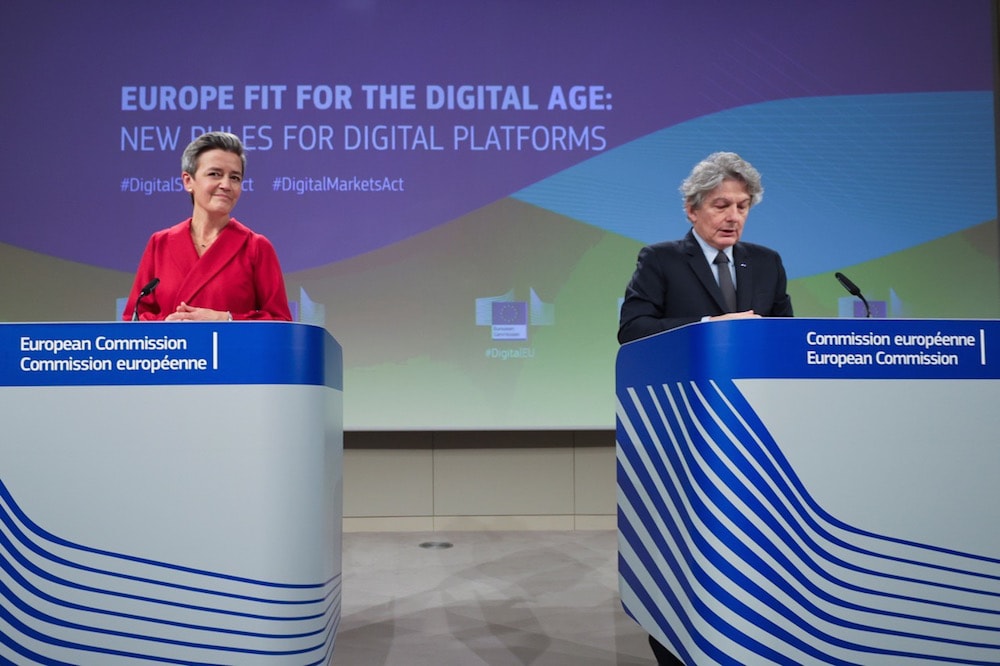 In December 2020, the European Commission presented the Digital Services Act (DSA) and Digital Markets Act (DMA). Both are aimed at regulating digital platforms and clarifying the policing responsibilities. These new pieces of legislation are billed as urgent pieces of regulation, mostly because of concerns that the likes of Google and Facebook have become too powerful.

Last week, Margrethe Vestager, the executive vice-president of the EU and competition commissioner, even quoted David Bowie when she urged MEPs to speed up adoption of the legislation, saying “so now’s the moment when you can be heroes”. The European official has said she hopes an agreement between the European Parliament, member states and the European Commission can be reached by “spring 2022”.
The DMA focuses on gatekeepers’ behaviours and their impact on market dynamics, while the DSA seeks to consolidate various separate pieces of EU legislation and self-regulatory practices that address online illegal or ‘harmful’ content and to harmonise the rules applicable to the provision of digital services across the EU.

The context in which the two texts are now being discussed is highly favourable to a tough position for the EU against platforms. The suspension of the social media accounts of former U.S. President Donald Trump by Twitter, Facebook, Instagram, Snapchat, and others this winter sparked a lot of controversy in Europe. Without defending Donald Trump’s quotes, German Chancellor Angela Merkel considered the move “problematic.” The EU Commissioner for the internal market, Thierry Breton, found it “perplexing” that Twitter’s CEO Jack Dorsey could simply pull the plug on POTUS’s loudspeaker “without any checks and balances.”. From a European point of view, governments and institutions should regulate, not the company themselves without any legal framework but their internal rules. Governments and institutions ensure the freedom of expression, and set boundaries such as hate speech and incitement to violence, and companies must comply to laws.

Paradoxically, for some time now, European politicians have been trying to convince online platforms to “do more” to police the content of their users. National laws such as the German NetzDG, the Austrian KoPlG and the unconstitutional French Avia bill all require more effective moderation of online spaces, including more and faster removals. But “online gatekeepers” making arbitrary decisions about speech they allow online remains an issue.
The key here is that the DSA aims to regulate the process and not to regulate the speech. The idea is to strengthen due process, clarify notice and take down procedures, improve transparency of the decision making and ensure redress mechanism for removal or blocking decisions. Platforms would face the prospect of billions of euros in fines unless they abide by new rules across fields including advertising transparency, illegal content removal, and data access.

The DMA is the other key legislation that the Commission wants to implement to tackle the complex challenges facing the EU Digital Single Market, and improve the gatekeepers’ behaviour. While the Commission has not named any companies, it has proposed criteria that are sure to catch Google, Facebook, Amazon, Apple, Microsoft and SAP, among others. In the DMA, it defines a gatekeeper as a platform that operates in one (or more) of the digital world’s eight core services (including search, social networking, advertising and marketplaces) in at least three EU countries and:

A platform that meets these quantitative thresholds is labelled a gatekeeper. The Commission would also be empowered to alter the thresholds as technologies change, and to conduct market investigations to look for new gatekeepers.

Consequently, the DMA only targets the truly massive corporations. This way, companies and potential competitors to the Big Tech companies are not burdened with undue regulation. Basically, the DMA would list “Do’s” and “Don’ts” for big tech companies.
For instance, no self-preferencing: a prohibition on ranking their own products over others;
Data portability: an obligation to facilitate the portability of continuous and real-time data;
No ‘spying’: a prohibition on gatekeepers on using the data of their business users to compete with them;
Interoperability of ancillary services: an obligation to allow third-party ancillary service providers (eg payment providers) to run on their platforms;
Open software: an obligation to permit third-party app stores and software to operate on their OS.

The DMA states that the European Commission alone will be responsible for enforcement, meaning they would investigate any alleged violations and hand out penalties to any gatekeepers that violate the DMA’s new rules. Sanctions could go from fines, to periodic penalty payments, additional penalties, including potential “structural remedies”.

Time will tell if the DSA and the DMA manage to change the way the Internet operates and tackle the accumulation of power in the hands of a few companies that happened in the last decade. In any case, before we can create an internet that puts people first, it is important to regulate the domination of a few and support competition. The proposals for a Digital Services Act and a Digital Markets Act are therefore meant to protect Europeans as consumers if technology poses a risk to fundamental rights.