Review – The role of social economy in a fair and sustainable recovery: input for the future Action Plan on social economy, March 2021, by Thomas Brisbart 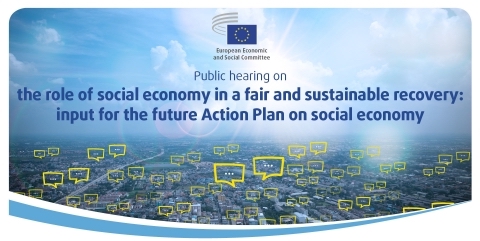 The first European Social plan, which will be driven by European associations and announced by Commissioner Nicolas Schmit, raises several questions. The consequences of the economic and social crises we are experiencing are putting the social economy at the forefront, which has shown its resilience capacities in the recent months. This is why the European Economic and Social Committee organised a public hearing on February 17th focusing on the role of the social economy in the European recovery.

“The circular economy can only work with fair regulation”

The European Union has been able to propose new legislative instruments that will strengthen the adaptability of its public policies and the resilience of its citizens. New levers for action were recommended in the recent strategic foresight report. Giuseppe Guerini (EESC) highlighted the appropriate response the social economy provided in the crisis and in the recovery. That is why there is a need for “a more harmonised fiscal policy among Member States, which would allow greater recognition of the general interest function of social economy organisations”, he said. This issue is also perfectly fits with the programme of the Portuguese Presidency of the Council that began last January, which focuses on the European social rights basis and also corresponds to the action plan announced by Mr. Schmit. It should be noted that this presidency is resolutely focused on the digital dimension, and that this dimension will be pursued during the forthcoming Slovenian and French presidencies.

The MEP Sven Giegold then focused on the role of the European Parliament in promoting social economy. According to the MEP, “the EU must support this sector as much as possible, in particular by going further in terms of public policies”. For example, it would be appropriate, according to Mr Giegold, to create a stronger statute for associations at the European level. “There is a real need for a new offensive from the European institutions to recognise the social economy in its diversity, to facilitate the procedures related to it and to create a clear and transparent status” he said. The MEP supports the idea that the social economy can only function on the basis of fair regulation, while relying on a long political agenda and continued support from public authorities.

Nevertheless, the EU is defined by the Treaties as a social market economy, which at present still seems to be lacking. It is necessary to find a good balance to bring business into this debate. Thus, the major economic sectors are seen as inactive in this area, according to Maxime Cerutti (Business Europe).

There is a need for help, especially financial help, in this sector, which has been weakened by the current crises. Filipa Farelo (CASES, Portugal) took the opportunity to point out that “the social economy should be given greater prominence in order to guarantee a better European transition, particularly in view of its importance in terms of resilience”. According to her, the social economy has demonstrated its capacity for inclusion and diversity, in terms of the good representation of women and people with reduced mobility it shows, compared to other sectors.

“The current crisis allows for change in some sectors”

Juan Pedreno (Social Economy Europe) pointed out the importance of supporting democratically functioning start-ups. Such initiatives would allow for a more active participation of European citizens, while strengthening protection systems and cooperation with the public sector to build innovative projects. Thus, the digital transition is a crucial issue for revitalising the social economy in Europe, especially in rural areas affected by the crisis through collective enterprises. The role of the state must therefore be reassessed to improve the resilience of each and every individual.

This position is all the more regrettable since the role of the social economy is clear in job creation, without being fully recognised, according to Gianluca Pastorelli (DIESIS). This is why the current crises could be a real window of opportunity to change certain sectors, such as “tourism, which can be made more sustainable and local”, in connection with the social economy.