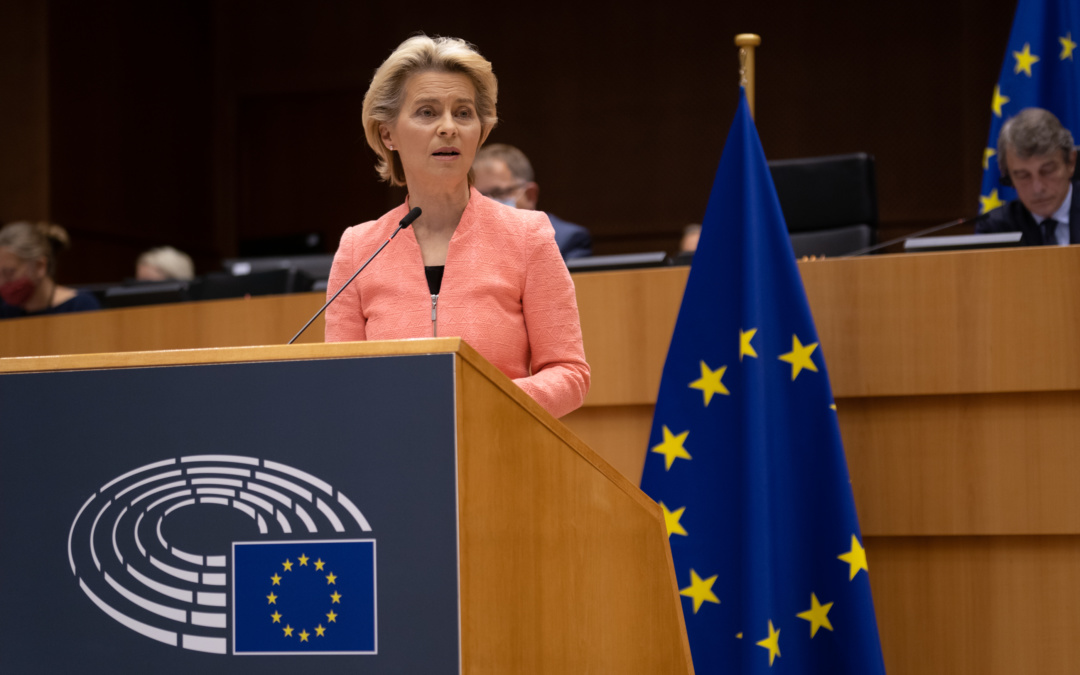 As every trimester, our EU Tech expert Arnaud Castaignet delivers his analysis on the last EU Tech data and policies. From the Digital part of the State of European Union Speech to the last editions of the European Digital Society Index, including the debates on Digital Service Act in Brussels, here is Arnaud’s sum up of what Social Good organisations must retain of the last EU tech news.

Ursula von der Leyen, President of the European Commission, presented on September, 16th to the European Parliament her vision in her first State of the European Union address. Since she got appointed, a strong focus has been made on the EU Green Deal. This speech was the opportunity to highlight the Commission’s other top priority: “Europe’s Digital Decade”.

Tech and digital will have a great importance in the Next Generation EU fund and will be backed up by 20% investment in digital from it, meaning €150bn of the EU’s €750bn recovery fund will be spent on digital projects. Three focus areas have been identified: industrial data, AI and infrastructure.

Talking about industrial data (as opposed to consumer data) shows that the EC will focus on the development of a data economy, hoping to reap the benefits of the fact the amount of industrial data in the world will quadruple in the next five years. The EC is pushing forward with plans to develop common data spaces hosted on a new cloud platform, GaiaX, in energy and health sectors for instance, and is looking forward to support cooperation between start-ups, companies, SMEs, researchers. When it comes to consumer data, Von der Leyen considers that Europe “has been too slow and is now dependent on others”.

On AI, the President of the European Commission actually pushed new AI governance laws back. When she was elected last November, she promised to introduce AI legislation within the first hundred days of her presidency. During her speech, she mentioned that it would be proposed next year, with “a human-centric approach” to rules and regulation. It is worth noting that she also propose a secure European e-identity, that will allow citizens to use it anywhere in Europe to do anything from paying taxes to renting a bicycle, and will guarantee control over personal data, which may sound similar to principles of Estonia’s e-identity.

Infrastructure investments should also be a strong focus in the road to “Europe’s digital decade”. It is more than needed given that digital divide remains very important in Europe as highlighted in the Digital Economy and Society Index (DESI), a composite index that summarises relevant indicators on Europe’s digital performance and tracks the evolution of EU Member States in digital competitiveness. Finland, Sweden, Denmark and the Netherlands scored the highest ratings in DESI 2020 and are among the global leaders in digitalisation. These countries are followed by Malta, Ireland and Estonia. Some other countries however still have a long way to go, in terms of infrastructure but also human capital and ability to use Internet services and technologies. Most of them are among the countries with the lowest GDP in the EU (Bulgaria, Romania and Greece, for instance) or strongly affected by Covid19 and its economic consequences (Italy). Therefore, there is a high risk that both digital divide and economic inequalities may deepen. It is worth noting that the biggest countries are not necessarily the most digitally advanced: France is only ranked 15th overall and even 18th when we focus on connectivity, according to DESI index.

The pandemic has exposed the stark reality of Europe’s digital divide. While countries and regions with good internet connections have been able to continue living life with at least a semblance of normality, others have not been so lucky. Of those living in rural areas, 40 per cent still lack access to fast broadband. The investment boost through NextGenerationEU will look to drive expansion to these areas. The investments will be focused on secure connectivity, on the expansion of 5G, 6G and fiber.

This State of the Union speech shows that digital and environmental transitions will be the key priorities of the EU in the coming years and that these transitions are deeply connected. Digitalisation is clearly considered as critical to achieve environmental transition, particularly in urbanism (smart cities), mobility and decarbonisation of the economy and the industry. Again, the main risk is that the same countries might be the winners. Denmark, for instance, is both among the leaders in digitalisation and one of the countries whose smart cities initiatives will help decrease the most carbon emissions.

Meanwhile, in Brussels, the Digital Services Act Package is the most important text for the EU digital economy that will shake up discussions between the Commission and the Parliament until the end of the year. It is an ambitious arsenal to tackle both the dominance of the digital giants and their policies on moderation. It is being led by Thierry Breton, European Commissioner for the Internal Market. In a recent interview with the newspaper Le Monde, he explains that the regulation of social networks “is intended to be dealt with at the European level”. Many of the measures are based on the French law on confidence in the digital economy (LCEN), which in France governs the same sector. The Digital Services Act also provides that the platforms can identify and locate Internet users posting under a pseudonym “if necessary”. In case of breach, the sites could be financially sanctioned or “be prohibited from accessing the internal market of the European Union”. For the platforms concerned, the calculations would be made according to a threshold of audience “yet to be determined”. The discourse is quite clear, however, and targets sites with “much larger audiences than traditional media, which gives them responsibilities similar to those of an editorial director or content editor”. Apple, Google and Facebook could be put on a “black list” established by the European Union (EU). As reported in the Financial Times, the EU institutions would be developing stricter rules to regulate the digital services market and impose new rules on the biggest players in the market, both in terms of business practices and data sharing and transparency on data collection. large companies to change their business practices. This would include forcing America’s mastodons to share their data and to be more transparent about how they collect it, according to specific criteria.
Discussed in Parliament in week 43, the own-initiative reports by Alex Agius Saliba (S&D) in the Internal Market Committee (Imco), Tiemo Wolken (S&D) for Legal Affairs (Juri) and Kris Peeters (EPP) for Civil Liberties (Libe) were adopted, almost without amendments.